With Heroku-WP I hoped to lower the bar in getting WordPress up and running on a more modern tech stack. But what are the performance implications of running WordPress on such a modern set of technologies? Surely it’s faster but by how much and is the performance gains worth the trouble? 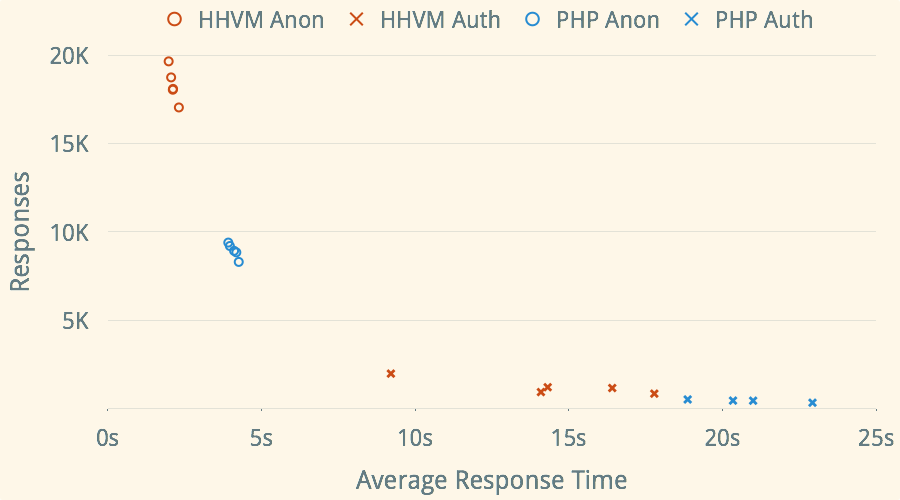 To answer that I’ve conducted a quick and dirty stress test of a sample WordPress site running under PHP and HipHop VM (HHVM) and found that the HHVM version loaded almost twice as fast and was able to serve over twice as many requests.

In the numbers above anonymous requests represents hits to various pages without a WordPress logged in cookie which are eligible for Batcache caching whereas authorized requests are hits to the same pages with a login cookie thus bypassing page caching.

To conduct this test I created a brand new Heroku instance based on the Heroku-WP template with the memcached addon installed. To populate the content I imported the WordPress Theme Unit Test after performing the initial setup. I then ran each permutation of the load test 5 times, flushing caches in between and averaged the results. When switching between PHP and HHVM I simply pushed a config change to composer.json and the boot script to toggle between the two interpreters.

To conduct the actual load test I used loader.io, (shameless referal link) a cloud based load generator with an insane 10,000 concurrent connection limit on the free account. (Quite generous when compared to the limit of 250 concurrent users on the free blitz.io account which I’ve used previously.) The free account of loader.io will only accept 2 URLs to test however with WordPress we can access most front-end pages via GET parameters passed to /index.php. Using this method and the following payload file I was able to have loader.io cycle through all posts, pages, categories, time based index pages, and the home page on the sample site for a more comprehensive sampling.

Finally, I ran all the tests for 60 seconds ramping up from 0 to 1,000 concurrent connections. I purposely excluded loading of static assets to place as much pressure as possible on PHP / HHVM for this synthetic stress test.

As expected, under high load MySQL is the real bottleneck, slowing down requests and causing errors due to hanging or killed queries. Caching was able to mitigate poor DB performance and bring page load times down by an order of magnitude for both PHP and HHVM.

Beyond that through simply turning on HHVM cut load times in half and appears to have allowed the server to better cope with multiple simultaneous slow requests piling up during times of high load. So if you have already installed a caching plugin and optimized your WordPress site running it on HHVM could potentially be an easy way to squeeze some more performance out of your setup.